"You Need to Find a University That Values You and You Will Value It in Return," STEM is FEM Said About Education in Europe, the United States and Asia

STEM is FEM invited three speakers with interesting personal experiences to tell us what education abroad really is, who needs it, and how to get to the best universities in the world. 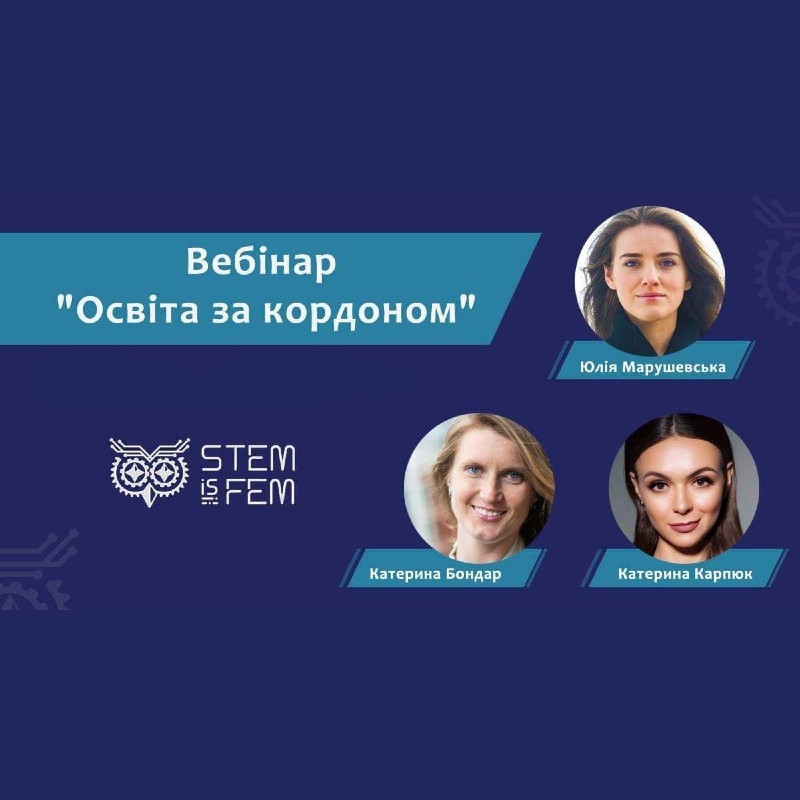 The 20/21 admission campaign in Ukraine is in full swing. And while Ukrainian universities are competing for the best entrants, Ukrainians show a stable interest in foreign education. The STEM is FEM charity educational project has invited three speakers who have the interesting experience of studying abroad to tell us what it is really like, who needs it, and how to get to the best universities in the world.

Yulia Marushevska, former Chief of Odessa customs and now a public activist, spoke about her experience of studying at Harvard, Stanford, and the University of London. She drew attention to the importance of choosing the right future educational institution:

'Every Western university has its own culture, its own values, its own "religion". They've got a profile of their ideal student, a special kind of person they want to see at their university. There are universities more focused on sports, on art, some universities need public persons, others want to get fans of exact sciences. And when you're looking for a university, it's very important that you personally match it.'

Kateryna Karpyuk, Adviser to the Minister of Health of Ukraine for European Integration, studied in Shanghai and Germany, and therefore when choosing a university, she invited applicants to pay attention not only to Europe and the United States but also to consider Asian education more meticulously. She believes that a student who graduated from the universities of Korea, Hong Kong, Japan, Singapore and China, won't have any difficulties in getting a dream job.

Kateryna Bondar, Social Reform Coordinator of the Ministry of Finance, who studied at Stanford University and worked in Singapore, agreed:

'Such big Asian hubs as Singapore, Hong Kong, Shanghai, Jakarta have relied on developing their human potential. They have greatly upgraded their education system by attracting the best practices of the old top universities. Almost every major Asian university can offer you getting a double degree. That is, they combine the program with a European or American university. Some of the courses are held in Asia, and others are either held in another country, or in Asia but with foreign teachers invited. And in the end, students receive two diplomas.'

And there is a big difference between European and American education, adds Yulia Marushevska:

'Training in Europe is much less intensive than in the United States. In America, there are constant deadlines, you are constantly passing tests, have to work mostly by yourself but with strong control. In Britain, you study the semester at your own path, attend the lectures whenever you want or depending on the teacher, but at the end of the semester, you take exams and write papers. However, here and there most of the work is independent.'

Explaining such trust in students' independent work, she notes that the world-class teachers are well-known politicians, managing company partners, modern philosophers, and they simply do not have time and interest to explain "alphabetical truths" to students, so they expect a student to be prepared to study.

The speakers spent most of the conversation on giving tips on entering the dream university.

'Essays and recommendation letters are extremely important when applying. In terms of importance, 40% are letters of recommendation, 40% are essays, and another 20% are a language test and an interview. This, of course, is in addition to official documents on your relevant education,' Kateryna Karpyuk shared.

'Knowledge alone is not enough to enter such universities. They are looking for personalities, people with interests, people who have something to tell about themselves. A cover letter is an opportunity to tell what kind of person you are. Tell your life story. It may be about your painful experience, how you overcome it. It may be about your achievements, maybe you are a volunteer, maybe you are saving the lakes in your region, or you are studying the history of villages, or it can be your sports achievements, scientific ones, Olympiads.'

She recalled that once she had to write a cover letter to get a place in a dormitory. Yulia also told Ukrainian students not to worry about their background, as it could be an advantage. According to her experience, large universities should attract students from all over the world to maintain their rankings, and if Ukrainians do not yet study in this specialty, it may tip the scales in favor of our applicants.

Kateryna Bondar pointed out that one should not delay the preparation process as it should be launched at least eight months before the start. The reason is that most universities out the deadline for applying documents five months before the start of the educational year. She also invited applicants to view https://www.mastersportal.com/, a platform that helps find grants for a master's program.

The lecturers also discussed the students' life beyond the studying process.

'There are student activities in Asia and they are cool. Living in a campus, you have a lot of opportunities. Of course, advanced language study. Not in a classroom but during the communication with students or schoolchildren who want to learn English, or in the movies. Local students invited us to a family dinner so we could see how they live and could talk to their families. When you live on an international campus, you study not only the culture of the host country but the culture of at least ten countries, because you are surrounded by people from all over the world. And we traveled a lot in China and beyond: in Indonesia, Cambodia, and other countries,' Kateryna Karpyuk shares her impressions.

'When studying at giants universities such as Stanford, it is very important to immediately understand how to share your time between training, thousands of events, and parties. And this is also important. It's not a secret that people who graduate from such universities then go through life together. These are very important connections and contacts. Many former classmates become successful, and these connections are maintained throughout life. This is one of the main advantages of studying in top universities. It is necessary to invest time in this during studying abroad,' says Kateryna Bondar.

And Yulia Marushevska urged not to be afraid to follow your dreams and not to consider yourself unworthy of the best universities in the world.

'You are not only competing for a place at the university, but universities are also competing for best students. It is important to understand the value that you bring with you to university. You need to find a university that values you and you will value it un return.'

You can see the full video of the webinar "Education Abroad" here: