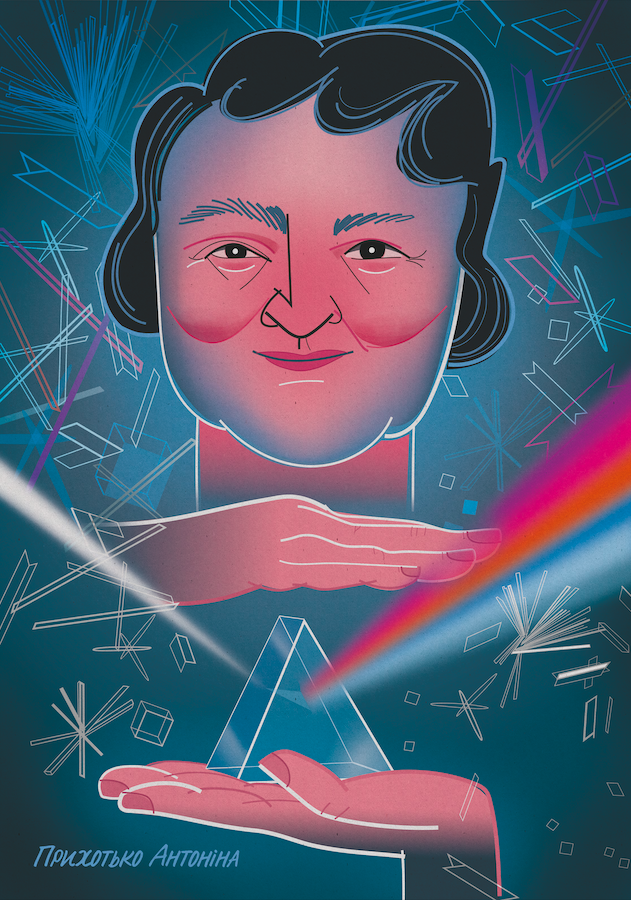 The author of the essay: Yaroslava Nazarenko

Who said that science is only for men and women can’t be interested in physics, mathematics, chemistry, or cybernetics? Since ancient times, girls have been assured that science is not for them. I believe that the scientific world is an infinite space where everyone can bring their ideas to life.

When I tell my friends or relatives that I would like to commit to physics, some people support my urge, but most of them tend to be judgemental and ask: “What do you need this for?” I don’t pay much attention to that and think of those women who did what they were passionate about and turned into eminent scientists. It’s been two years since I joined a physics club, so I thought I’d read about Antonina Prykhotko. There aren’t many facts about the personality of this outstanding physicist, but her scientific achievements are indeed impressive: she is a Doctor of Physical and Mathematical Sciences, Professor, Academician of the AS USSR, Laureate of the Lenin Prize, Heroine of Socialist Labour.

On April 26, 1906, an ordinary girl named Tonya was born in Pyatigorsk, and no one could imagine that her name would remain in history.

After graduating from high school, Antonina enrolled in the physics and technical faculty of the Leningrad Polytechnic Institute. Perhaps, it all was determined by her acquaintance with young Aleksandr Leipunsky, who not only fell in love with the beautiful girl and married her but also made her “fall in love” with science that is based on discoveries and experimentation. Oh, that was the age of physics!

Studying was challenging but exciting. Having noticed the scientific potential of the girl, Professor Ivan Obrimov engaged Antonina in scientific activities, and after finishing the institute, she remained there working as a researcher.

The life of the young scientist is closely linked to Ukraine and the development of Ukrainian science. In 1930, having moved with a group of young scientists to Kharkiv, Antonina began working at the Ukrainian Institute of Physics and Technology. There, she conducted scientific experiments on oxygen, nitrogen, argon, studied spectra of absorption of halogen crystals. She developed a technique for growing ultra-thin crystals. And then, World War II began. But even during that challenging time, the scientist continued to pursue science and, while being in evacuation, she defended the scientific thesis! Her discoveries helped at the Front.

Following the liberation of Ukraine, Antonina moved to Kyiv to organize a spectral laboratory at the Institute of Physics, which became the world’s largest center of low-temperature spectroscopy of non-metallic crystals. The scientist masterly carried out an experiment with ultrathin monocrystals of naphthalene, which remains exemplary in the field of spectrography.

Antonina Prykhotko is a many-sided personality. An outstanding scientist, researcher, engineer, talented organizer, and educator who has created a scientific school and a raised brilliant assemblage of scientists. Her friends remember Antonina as a wonderful wife, the strongest supporter, and soulmate for her husband, the renowned nuclear scientist Aleksandr Leipunsky.

Interestingly, one family united two academics, two laureates who lived peacefully together, and who gave birth not only to scientific discoveries of global importance but also to a wonderful daughter, who, in her turn, gave birth to their grandson that heads a laboratory created by his grandmother.

Antonina Prykhotko’s research and scientific works are still used in various fields of biology, chemistry, and medicine. She focused on developing structural analysis of crystals, laser optics, high-temperature superconductivity, cryobiology, and cryomedicine. She also created cryogenic devices that are now being used in oncological surgeries.

Big titles, ranks, awards, and what is behind them? Famine, cold, two terrible wars, the Holodomor, her husband’s arrest, his exile, and then his return. The sleepless years of searching and observing, failures and discoveries, cooperation and inspiring success.

Antonina Prykhotko encourages girls who want to become scientists. She shattered the “primordial” myth that it was impossible to combine scientific activity and private life. And with all her achievements, she has confirmed that science is gender-blind!